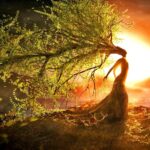 While living in the 3D Matrix, an entirely distorted reality dominates the collective consciousness perpetuating human ‘halves’; men and women seeking to unite and merge with each other to become whole again. Men who have yet to integrate all their yin energy are deficient and plugging into women’s sexual energy.

Multidimensional DNA Activation ~ Hello Paul, We are entering new territory! 2018 is proving to be an exceptional year, as incoming solar winds alter the geomagnetic field and trigger subsequent…

With the partial Solar Eclipse approaching on February 15th, we have been experiencing increased energies for the last 2 weeks. We have been in the Eclipse Portal since the Supermoon Lunar Eclipse.

Five million years ago the genetic mutation was placed in DNA strand 1 to cause blockage of physical and etheric bodies. The sixth activation code (over tone) of the first DNA strand was removed, causing mutations in 1,2, and three DNA. It manifested in blockages of bodies particles and anti particles of the spiritual body of the parallel universe. That seal removed the humanities ability to have an Immortal body. It removed bodily transmutation and ability to pass into our Divine Blue Print. Seals were also placed in the sixth overtone of the sub harmonics in DNA strand 2 and 3. This became known as the 6-6-6 Death Seal.